How to Make Your Car's Navigation System Safer

Last night, I was watching The Colbert Report do a segment on Obama’s State of the Union address. During one part of the speech, Obama encouraged entrepreneurship as a cure to our current economic crisis, reminding us that America is responsible for putting cars in driveways and computers in offices. Colbert made a joke about how we then proceeded to put computers in cars, which put the cars in offices thanks to poor drivers distracted by their touchscreen navigation systems.

We hear stories all the time about people who drove their car into a ditch or into their garage door because they were looking at the screen instead of the road. Obviously, having a touch screen in the car is not good for safety. Some car manufacturers have tried to address this by preventing the screen from being used while the car is moving, but this is a huge annoyance for a passenger who should be allowed to freely use the screen.

In November, I competed in Lawrence Tech University’s Innovation Encounter, which is basically a product design competition where you are given a problem and you have three hours to design a solution and present it. In this particular competition, we were tasked with designing the best way to integrate an iPhone with the car.

My team and I decided to focus on improving the experience of using one’s phone in the car, rather than creating any new overt features. For example, it’s annoying to have to carry my keys everywhere when I already carry my phone, to have to plug my phone in every time I get in the car, and to switch between using my phone and using my car’s control system. We designed an elegant solution that would solve each of these problems.

Cars that start when the key is still in the driver’s pocket have become extremely popular lately. But why not make my smartphone the key itself? Assuming that our phones have NFC chips in them in the near future, replacing the physical key with a smartphone should be trivial.

Finally, instead of switching back and forth between my phone’s interface and my car’s interface, why not just let my phone control my car and not require me to even fiddle with the car? The most common adjustments a driver makes when entering his car are to adjust the rear view mirror, fix the seat location, change the air conditioning temperature, input a location in the navigation system, and play some music. If we are using our phone as our key, then the car already knows which person is driving based on the phone that is in the driver’s seat, so it can automatically adjust the rear view mirror and seat location based on the user’s saved preferences. I’ve seen cars that support driver profiles, but none that automatically switch based on recognizing the driver’s phone. Usually, I adjust my car’s interior temperature when it is either extremely hot outside or extremely cold. That means that ideally, I want to set the temperature while I am still inside my house or office. I should be able to easily choose a temperature on my phone and push it to my car, which will enable the air conditioning so that the car is waiting for me at perfect temperature when I get there. While I’m setting the temperature, I want to be able to also push the directions I looked up on my phone’s built-in maps app to the car’s screen without fiddling with a second navigation system. Now, when I get into my car, everything is set up, the temperature is perfect, and the car already knows where I’m going. As soon as I enter the car, it should begin streaming my music from my phone via Bluetooth. We call this system SmartHawk. 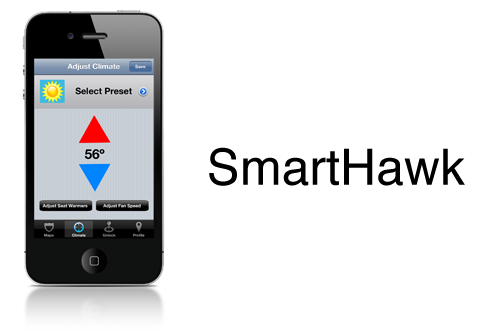 Now that’s the perfect in-car experience in my mind. Of course, we designed all of this in less than three hours, so some of these features may already exist and we just couldn’t find them or some of them may still be impossible for some reason I haven’t thought of yet. But from as far as I can tell, each of these features should be feasible, and the existing solutions seem to stop just one step short of such a seamless experience.

But wait, what does this have to do with making the navigation system any safer? Well, for one, you no longer need to use the car’s screen because everything should be set up before you even get to the car. But just in case you are still tempted to do so, we designed a safety measure that we can’t figure out why nobody has implemented yet: we placed a proximity sensor on the left side of the in-car screen that would activate while the car is driving. If the driver tries to reach over to the screen, it will immediately shut off and prevent him from doing so thanks to the proximity sensor, but the passenger can still freely use the system from her side.

We ended up winning “Best Business Acumen” with a $500 cash prize, which is nice, but I’d like to see these features actually built into a car one day. Luckily, at the rate Ford Sync is improving, that may be sooner rather than later. When somebody does build this system, let me know and I’ll be the first in line to buy it.