Well, ok, not actually introducing, since Odorno isn’t a real product. It’s an early-stage business idea my partner-in-crime Muhammed Fazeel and I came up with our first year in college.

The idea was that the excitement of moving into a new home, apartment, or dorm was often muddled by the stress of having to shop for furniture. Usually, furniture shopping required taking detailed measurements of your home, then driving store to store, finding items that will fit in your space while also looking nice and matching, bringing the items all the way back home, and if it didn’t work out for whatever reason, taking it back to the store. Lather, rinse, repeat.

At the time, IKEA offered a free virtual room planning software to tackle this problem. We tried using it, and even with our engineering backgrounds, were completely at a loss. It required first creating a top-down 2D blueprint with manual dimensions of your rooms, which is not a trivial task. Another major problem was that the furniture catalog was limited to only IKEA’s products. After a lot of work, we finally got a render of what our room looked like according to IKEA’s software: apparently we had three chairs floating midair in the center of the room and a desk half way through the door. Yup, pretty accurate.

We wanted to simplify this process by using augmented reality to allow homeowners to easily create 3D panoramic models of each room that needed to be furnished. These models would be created from a simple automated tripod equipped with a camera and laser tape measure that could automatically create a 180° panorama of the room with the push of a button. The laser tape measure would calculate dimensions and perspective using a matrix imaging algorithm we came up with that was inspired by medical imaging techniques (at least in theory, we never got to test if our imaging method would actually work).

These models would then be uploaded to our online service, which would feature an extensive catalog of furniture from various manufacturers, already filtered to only show the ones that will fit in the user’s room. Users could easily drag-and-drop items into their room for an immediate visualization of how the room would look, even in different lighting conditions. The service would even feature an interior design community, where a professional designer could help you design your home for a small fee or an amateur designer could suggest designs to build his or her portfolio.

We had submitted this idea to an entrepreneurship competition at Illinois Institute of Technology called the Idea Challenge. To our surprise, we won second place with a $100 prize and advanced to the Idea2Product MO-IL regional competition at Saint Louis University. As we prepared for the regionals, we talked to a handful of manufacturing companies in Chicago to see if they would consider listing their products in our catalog, and generally received a positive response (although this was probably because we were just students and they weren’t making an actual commitment). We also talked to a couple real estate firms to see if they would consider using our service to help their clients furnish new homes, and also received a generally positive response. We created hundreds of versions of our presentation, designed UI mockups, and wrote our first five-page product summary. 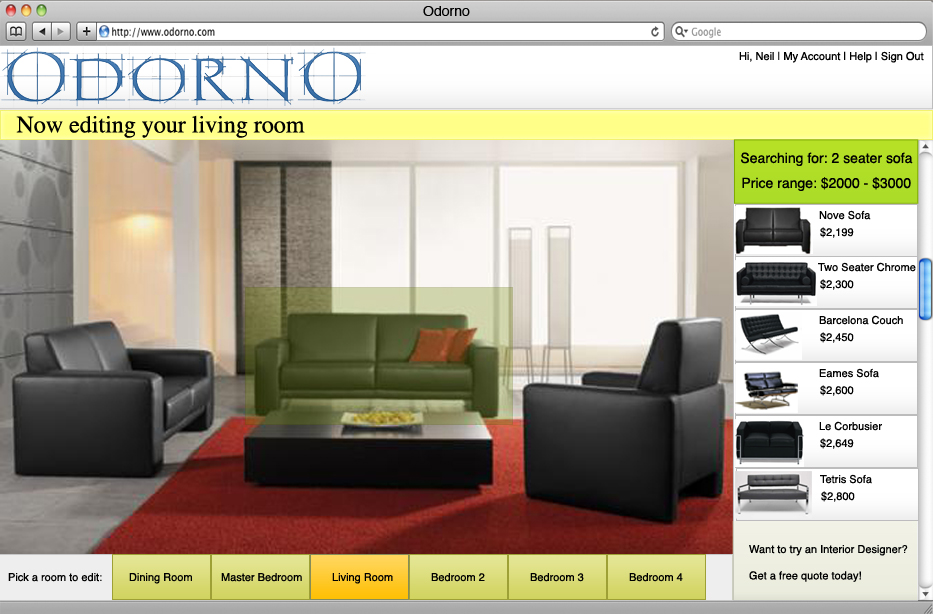 After much stress and many sleepless nights, the day of the competition arrived. We nervously gave our presentation, and awaited the results. In the end, we won $250 but did not advance to the finals. Wondering how we could improve, we eagerly found our judge to receive feedback. We were shocked to hear a couple of racist and even sexist comments that I won’t detail here. Suffice it to say, we were quite angry, though, in hindsight, this incident is one of the most humorous experiences I’ve had as an entrepreneur, and was a definite learning moment for us.

As student entrepreneurs, we expect to receive our fair share of racism and ageism and other forms of discrimination. There will be ups and there will be downs, but that’s what makes the journey fun. The only thing that matters is how we deal with the downs, and we chose to keep pushing forward because the ups totally make it worth it. A few months later, we competed in Northwestern University’s Entrepreneurship Idol, where we reached the finals and lost due to a mistake on our part. We were just ecstatic to have successfully competed in such a high-level competition at such a relatively young age (I had just turned 19 a few weeks earlier), and we knew that we were going to make make something big together.

However, after much deliberation, we decided to shelve Odorno in favor of another idea we wanted to pursue for a few reasons:

Having said that, I still think there is a future for Odorno.

We know that everything is moving towards augmented reality, and nowhere does this make more sense than in the home decor industry. Since shelving Odorno, we’ve seen various companies release concepts and even actual products that piece-by-piece come closer to our goals with Odorno. First, there was the fake “Apple tablet” concept video that showed how users would shop for furniture in the future. Then, UC Berkeley researchers showed off a laser backpack that creates instant 3D models, obviously a perfect fit for Odorno. There was also the Nooka Augmented Reality Accessorizer concept video, which showed a similar concept to Odorno applied to trying on watches from your home. And that’s just a small taste of the many companies working on solutions to this problem, but as far as I can tell, nobody has tried our approach. Of course, this may be because it is technically impossible right now, or simply because nobody has thought of it yet (hopefully the latter). Keep in mind that our idea is over three years old and was created long before the recent surge in augmented reality became popular, meaning there have probably been huge advances in the field that could be applied towards Odorno since we last researched it.

I’m finally releasing these documents and telling this story because in the past few weeks, we have decided to completely dedicate ourselves to our current project, Tabule. Just as it’s important to never give up on an idea you believe in, it’s also important to recognize when you are not capable of making an idea a success, at which point you should refocus on something that harnesses your strengths. That means that we will not be following up on Odorno, but I sincerely hope that somebody else will. I finally got a chance to write up this post, and hopefully somebody will stumble across it and find it inspirational. Given the large interest in this field and the size of the industry, somebody with the requisite know-how might just be able to turn this into a success where we couldn’t.

If somebody does find this idea interesting and wishes to take it up, feel free to email me at hey@neil.gg if you want to see our presentation slides or other details on the idea.