How Apple Adopted the Kleenex Problem

I just realized that some people think the Samsung Galaxy Tab is a type of iPad.

I heard the following conversation a few days ago:

Person A: I just bought this new iPad.

Person B: Nice, is it a Galaxy Tab?

Person B: Yes, but is it a Galaxy Tab?

At first, I thought person B had simply misheard person A, but that didn’t explain the clarification. Then I read an article at The Sydney Morning Herald, interviewing Samsung Australia’s vice president of telecommunications, Tyler McGee, about the effect Apple’s lawsuits against Samsung have had in Australia:

“At the end of the day the media awareness certainly made the Galaxy Tab 10.1 a household name compared to probably what it would’ve been based on the investment that we would’ve put into it from a marketing perspective.”

The overwhelming majority of the media coverage I’ve seen for the Galaxy Tab is related to Apple’s various lawsuits.

The majority of people probably only hear about the Galaxy Tab when it’s paired with Apple’s name, which understandably leads to an association between the two companies.

It has been said that, “There is no tablet market, only an iPad market.” By that logic, it is reasonable to assume that most consumers now view ‘iPad’ as a general product category, rather than a specific product, much like Kleenex or Xerox. When a competing product is announced, it is now another type of iPad.

Kleenex invested a lot of time, money, and energy fighting the misappropriation of their brand name. The problem is that people assume all brands of tissues on the shelves are Kleenexes, diluting the Kleenex brand. If they are unable to prevent people from using their trademark generically, they risk becoming a genericized trademark and no longer being legally protected. 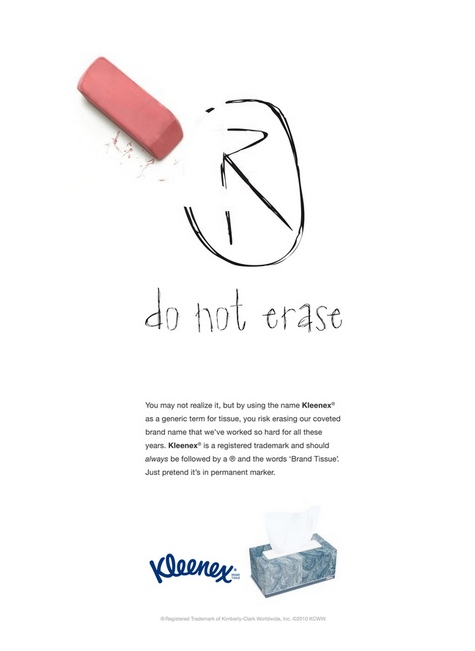 You may not realize it, but by using the name Kleenex® as a generic term for tissue, you risk erasing our coveted brand name that we’ve worked so hard for all these years. Kleenex® is a registered trademark and should always be followed by a ® and the words ‘Brand Tissue’. Just pretend it’s in permanent marker. (via Stephen Young)

It’s a common problem that many large companies face. Apple, for their part, has been extremely aggressive in protecting their trademarks, often suing for any use of the word “pod” or the iNoun naming scheme.

However, it seems Apple is on a path to generating a trademark problem for themselves with the iPad brand. Ironically, the iPhone brand hasn’t experienced this problem thanks to the “us-vs-them” mentality of the Verizon Droid ads. “Droid does” is a well-recognized slogan that implies there are differences between Android and iOS, separating the two products in consumers’ minds. With the iPad so strongly dominating the tablet market and few recognizable competitors (who’s heard of the Xoom outside of tech geeks?), that difference between competing products ceases to exist.

The question then becomes, did the lawsuits against Samsung do more harm than good for Apple? I believe the former will become increasingly apparent. They should have just let the Galaxy Tab release and fade into obscurity, rather than accidentally turning it into a household name that’s linked to Apple’s brand.