I received my first copyright infringement take down notice today!

From who? Sky Italia, a News Corp. company.

For what? A “How to post to a forum on Moodle” tutorial I posted on YouTube in 2007 for a Google Summer of Code task. That means it was requested by Moodle, and sponsored by Google. It consisted of a screencast of Moodle and my voice over.

I woke up to the following email this morning: 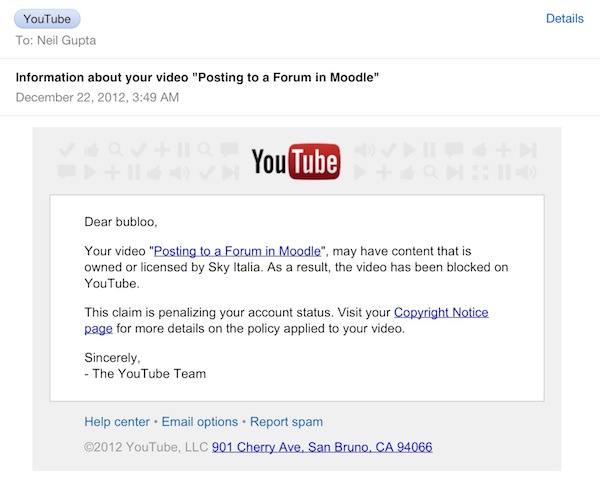 No appeals process, no “reply to let us know that this accusation is about as legitimate as Facebook’s Poke app is original.”

The video is blocked, and apparently my account has been penalized. I am assuming they are referring to their “three strikes” policy, where if I get 2 more such bogus claims against me, my account and all uploaded videos will be deleted.

Now in this particular case, I don’t actually care. I haven’t used my YouTube account in years and don’t even know the password anymore. I probably wouldn’t have even noticed, had they not emailed me. The only reason I had left the content on YouTube was to have a historical record of them for nostalgic purposes.

However, I suspect this kind of behavior happens a lot. I remember last year’s debacle with Universal Media taking down Megaupload’s promo video using the same flawed DMCA process. What’s more frustrating here though is that this was a purely educational video that has helped at least a handful of people over the years. I believe Moodle was even linking to it from their support site at one point.

This may be a relatively rare problem right now, but if it is not nipped in the bud, it could grow into a major headache for YouTube. Why would I upload my original creative content if there’s a chance my video will just get blocked by some large company with too many lawyers? This is similar to the problem Twitter developers face today. Why should they develop for the Twitter ecosystem if Twitter might just cut them off any day?

The ball’s in your court YouTube. Don’t drop it.

Update: Out of curiosity, I decided to log in and try to appeal the claim, at which point I got this error:

There doesn’t seem to be much else I can do anymore to resolve this issue. YouTube really needs an actual appeals process.